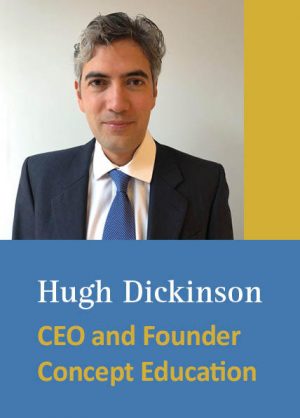 Hugh is the CEO and Founder of Concept Education.

Hugh was educated at Stonyhurst College and has a degree in Classics from Bristol University as well as an LLB from the College of Law. After university he served for six years as an officer in the Irish Guards (including one year at the Royal Military Academy, Sandhurst) deploying on operations to Bosnia, Northern Ireland and Afghanistan.

After the Army, Hugh trained as a solicitor at Ashurst and then joined BlueBay Asset Management in 2013 as Fund Legal and Product Development Manager.

His interest in education developed during his time training young soldiers in the Army and has remained with him throughout his subsequent career in law and finance.

Through his work on The Boarding Project and as a governor at Downside, Hugh has developed a deep insight into current trends of the boarding school market and the competitor universe. Hugh is married to Melody and lives in West London with his wife and two young children

The Advisory Board exists in order to provide educational and commercial expertise to the project.

Andrew is the Member of Parliament for Northampton South (2017 to present). He is the Chairman of the All Party Parliamentary Group for Independent Education and Parliamentary Private Secretary to the Home Office. Andrew was a MEP from 2014-17, Deputy Chairman of the Local Government Association from 2011-14 (Vice-President, 2014 to present) and Leader of Derbyshire County Council from 2009-13. He was awarded the MBE for services to local government in 2014. Andrew has served as a UNESCO World Heritage Site Chairman, Chairman of a Health and Wellbeing Board and Deputy Chairman of a Tourist Board. Andrew served as a University Governor for nine years and chaired the annual conference of European independent schools in Brussels. Andrew was educated at Queen Elizabeth’s Grammar School, Ashbourne, Derbyshire (a state boarding school at the time) and studied History at Newcastle and Cambridge universities. He is married with a young son.

Aly owns and manages Country Court Care which has more than 30 care homes across the UK. He was educated at Oundle School and studied his LLB at BPP before joining the business in 2005. During his time within the Company, Aly has been passionate in his vision; to improve quality of care and hospitality within the sector and is proud for Country Court Care to now be considered as market leaders in the luxury care market.

Having expanded from five Homes in 2005, Aly is acutely aware of the challenges presented by growth in a highly regulated sector and has experience of implementing systems and processes to ensure quality is never compromised. Aly is the Chairman of Oundle Rugby Club where he also captained the first team for several years.

Jessica is Head of a well known GSA school since April 2019. From 2014-2019, she was Head of Queen Margaret’s School, York which is the only girls full boarding school in the North of England. Jessica was the first female Head of Queen Margaret’s since 1982. Prior to this she spent seven years as Deputy Head of Leweston School in Dorset and 11 years teaching at Dulwich College, London during which time she rose to be Deputy Head of the Upper School, Head of Lower Sixth and Head of Spanish.

Jessica was educated at Farnborough Hill School and Oxford University.

Grace is a director of the Education Consultants at the Good Schools Guide. She has a wealth
of experience in education in the UK having visited about a hundred schools for the Good Schools Guide since 2004. She has also run her own advisory, Moodystuart Advisory, helping parents to identify the right school for their child, assisting them with the process and securing the best outcome. Her clients include UK clients who live in the UK, others who are moving here from abroad, as well as international families from all parts of the world.

Grace read Classics at Cambridge and practised as a Barrister at Outer Temple Chambers until 2003. She then spent seven years teaching Classics at Sussex House School where she was also Assistant Director of Studies . She has four school-age children and lives in West London.

Francesca is the founder of the Italian School in London and is also a PR and marketing consultant. She started her career as a magazine and book producer for a publisher in London. Subsequently she specialised in the production of promotional events for the SMH-Swatch Group. She put together a group of volunteers and opened the Italian School in 2010 where she was Chair of the board of Trustees until last September.

She still sits on the board as leader of the business development team. She has a degree in Philosophy and Modern Languages (French) at Oxford University. Francesca is the Local Authority governor of St Francis of Assisi Primary School in London.

Will is the founder and a director of Keystone Tutors. Will attended Harrow School and Oxford University. After Oxford he taught history at Fulham Prep School. He set up Keystone Tutors in 2007 and has established it as one of the UK’s leading tutoring organisations with offices in Hong Kong and Singapore.

As well as being a governor of Westside Free School, Will is an active participant in UK education debates, appearing on Newsnight, The Today Programme and at the Wellington Festival of Education.He has advocated for the professionalization of tutoring in leading UK newspapers, and has spoken on education at institutions such as Credit Suisse and Freshfields. He is a board member for The Tutors’ Association and the Harrow Association.

Martin is the former High Master of St Paul’s School in London. Prior to that, he was
High Master of The Manchester Grammar School and Headmaster of The Perse School, Cambridge. He was Chairman of HMC (The Headmasters’ and Headmistress’s Conference) in 2014. He was described as ‘the most influential Head in the independent sector’ by the Times Educational Supplement and the Daily Telegraph.

After St Paul’s, Martin was the Director of Education for GEMS (UK) and Chairman of the Clarendon Academies Group, and Founder and President of The National Mathematics and Science College. Martin was educated at Uppingham School and has a PhD from the University of Sheffield. He is a Founding Governor of The London Academy of Excellence, as well as being the author of several historical novels and books on education.

Harry has been Managing
Partner of Harrington Cooper since 2011, a cross-border distribution business that raises assets from institutional and wholesale investors in the UK, Europe and Japan for investment managers based across the globe.

Prior to his career in asset management, Harry was an officer in the Irish Guards, retiring as a captain in 2006. As a father of three children, aged six to 13, Harry takes a keen interest in educational matters.

Stephen is the Finance Director of 200 Degrees Coffee since May 2019. He has also opened Venture Learning an Alternative Provision set up to support Key Stage 3 and 4 students.

Prior to that, he was a Partner and Finance Director of Nelson Solicitors from 2016-2019 and Finance Director of Country Court Care from 2014 to 2016. Stephen is a qualified ACA who trained with PricewaterhouseCoopers and has over 18 years’ experience in finance, operations and risk management. He has worked in a turnaround capacity for SME businesses as well as supporting a number of businesses through a growth phase ensuring the infrastructure is sufficient to drive safe growth, with an ever-watchful eye on cash flow.

Areti has a particular interested in digital teaching and learning. Areti serves as both a Regulatory Compliance and Education Inspector with the Independent Schools Inspectorate. She is also a Governor at Holme Grange School, where she Chairs the Marketing Committee.

Educated in South Africa, Areti holds a B.Sc., B.Ed. (hons) and a PGCE from the University of South Africa. She is currently completing her MBA with UCL. In addition, Areti is a published author, working with Oxford University Press and has co-authored three books on Computing.

Robert is the Founder and CEO of R Fletcher and Partner who provide advice to schools and universities on communication strategy, key messaging and implementation since 2005. The clients he has worked with include Nottingham, Oxford (St. Benet’s), Aberdeen, St. Andrews and Liverpool universities as well as the following schools – Eton, Ampleforth, Worth, Sedbergh, Sherborne, Rugby, Roedean, Downside, Stonyhurst, Tonbridge, Bedales and Westminster.

Prior to this Robert worked in advertising for Interpublic and Saatchi. At Saatchi he began as Group Head in London followed by 3 years as CEO of the South East Asia region, then 9 years as CEO of Central Europe, followed by 8 years as CEO of North America, based in New York. This involved working with senior management of multi-national clients such as P&G, KGF, J&J, BA, FT, Toyota, Microsoft and HP.
Robert was educated at Repton and Oxford University where he read Modern Languages.

Steven has over 20 years of institutional investment management experience, investing globally in real assets. His track record includes founding his own fund management firm alongside Sir John Beckwith, listing a Real Estate Investment Trust (REIT) on the London Stock Exchange and launching UCITS strategies. Previously, Chief Investment Officer to one of the largest pension schemes in the UK and formally Senior Consultant to a range of institutional and sovereign wealth funds within real assets.